There are few things I can get this excited about so when I see Sammich lose her mind over a simple piece of ice it makes me a little jealous.

The way the anticipation builds every time she hears the ice bucket.

Snatching a piece of ice and running with it only as far as she can stand before the chill is too much for her jowls.

The slippery play, back-and-forth, as she and the ice skate across the hardwood floors.

The way she feels dared by the ice to grab it and hold on for as long as possible.

The way she throws her ears around in a happy neurotic fit.

The way she lights up at the thought of getting to play with this slippery lil’ thing.

Ice, ice for my baby. 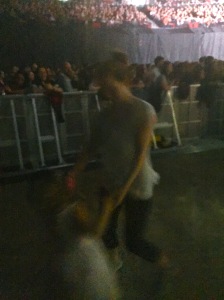 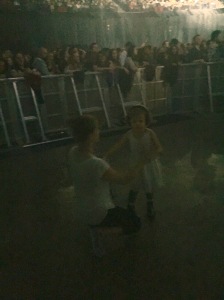 “Ok, we gotta put a spell on them so they leave us alone.”

Jumping on tour with a grammy award winning rock band was not supposed to be like this. There’s supposed to be much more booze and debauchery. Instead, backstage is a mix of young musicians and their families. I jumped on for the homestretch of this European tour. This particular three year old is all about her princesses and princes. In fact, she claims my boyfriend as her prince and had a hard time accepting that fact that I was the ‘other woman’. But, not this day of tour. This day of tour, we flew to Mars and explored our way through the forest (duh, of course there’s a forest on Mars) and dodged bears and witches and wolves. We picked berries off of bushes to feed ourselves, and poisoned a witch, scared a bear, and made friends with the wolves. “Now, let’s go to sleep” she said. Moments later, a scared sigh as we woke up, “Do you hear that?” “Yeah” she said, letting me add something to our forest. “What is it?” “It’s a bear!” We made ourselves big and tall and yelled at the bear to not eat us. It worked! “Now, we have to go back to sleep” she said. So we slept. We slept until one of us was startled awake and a new adventure waited to be experienced before we caught back up on our princess beauty sleep.

When was the last time you played with a three year old? Allowed yourself to let go and share your imagination with someone who sees the world as completely limitless? It’s a humbling experience as a adult. The world is full of challenges that fog your view of all the possibilities that still exists. The older we get, the foggier it seems to get sometimes. And, sometimes, all it takes is the imagination of a three year old, a bright and hot beam of sunshine, to clear your view. Play on.