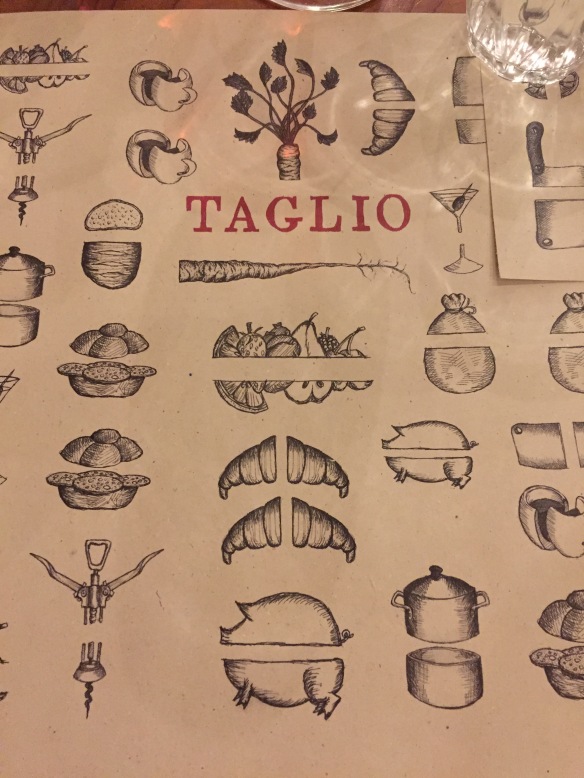 In the middle of the hustle and bustle of the main drag in downtown Milan lies a quaint, warm farm-to-table spot called Taglio. Finally, a place with such an authentic menu that I could barely understand the choices that lay in front of me. “Caprese” and “burratta”, an obvious ‘yes please’. Risotto Milanese, check. The guys were told there was just one two and a half pound t-bone steak left so it was ordered with a quickness. Our waitress came to see what kind of water we wanted (only in Europe can you guarantee that every restaurant, from white table to casual cafe, will make sure you make a decision between still and sparkling) and I took the chance to humbly ask if she spoke any English. “A little ” she said hesitantly. I pointed to what I believed to be a pasta dish. “Yes. Pasta. Very good.” Fine. Sold. The veal, which shows up on every menu in Milan, was the last dish to round out our feast.

Perhaps it was the electric mood of downtown Milan, or maybe it was the bottle of white wine we consumed, as if it were water, from room service before we left the hotel, but I’m sure we were the easiest customers to please that night. “Mi scusi, two glasses of rosatii. Grazie.” I didn’t need another glass wine but…yes I did.

Our dishes were spaced out perfectly giving us plenty of time to eat, savor and laugh. Also enough time to allow our waitress a chance to sneak outside past the ‘Vietato Fumare’ sign to, one could easily assume, fumato.

The guys went after the steak tartare like privileged cavemen. By the time the two and a half pound steak arrived, so did a fit of laughter. Consuming this much meat felt ridiculous and we all knew it, but the dilated pupils of the guys was evidence enough that these two were fully ready to consume this meat, the size of a teenage human head.

Eating too much good food is a lot like drinking too much, your eye lids drop to half-staff and you start to stoop over the table in defeat, but if offered more it’s hard to refuse. Our lack of Italian is the only thing that kept us from ordering everything on the dessert menu. We were too exhausted to attempt any lame translation.

As we got up to leave, the waitress walked over to the stereo, surrounded by stacks of CDs and records, and put on some reggae. Mood set. Time to go. Back to the streets of Milan to see if we could hail a taxi before we got dangerously close to a gelato shop.